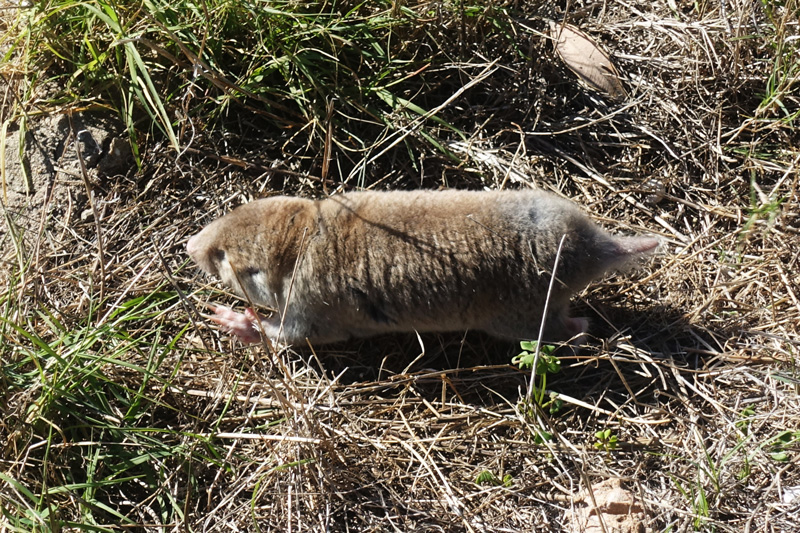 No creature can survive without a supportive habitat that will provide both food and shelter. Park Island and the Cape Flats are the perfect habitat for the Cape Dune Mole-rat so I guess we should not be surprised that its most ardent predator is the Mole Snake [Pseudaspis cana]

The Mole Snake is a misunderstood snake, often confused with the venomous Black Mamba or the Cape Cobra. In fact, it is not a danger to humans at all, although it could bite if provoked. It varies tremendously in colour from nearly black to light brown, so look for its small head and pointed snout. It also enjoys sunbathing. Sadly, this useful snake is often mistakenly identified and killed on sight.

Its preferred habitat is sandy scrubland/dunes. It is a powerful constrictor with a pointed head that is well adapted for its burrowing existence. It spends most of its time underground in search of food, typically moles and other rodents. It has been known to take birds, eggs and nestlings. Juveniles feed largely on lizards. Its prey is seized by the head and constricted.

Adult males are known to engage in combat during the mating season, but otherwise they are generally solitary and viviparous, giving birth to an average 25-50 young in late summer. The newborn snakes measure 20-30cm in length.

The Mole Snake pictured here was discovered idling over the Park Island road bridge a few weeks ago. Despite some efforts to relocate it into the nearby bush, it was determined to continue unhurried under the gate and into suburbia!

Cape Mole-rat (Georychus capensis) I have featured these animals, the largest of all moles, before. But after having the opportunity to photograph the Mole Snake, last week I came across this Cape Mole-rat above ground, displaying this interesting behaviour. I’m not sure whether it was lining a nursery burrow or storing fodder for the winter. While they destroy many a gardener’s joy, I can’t help being curious about them.

They have soft fur, cinnamon to pale fawn underparts, short tails, rounded heads, well developed prominent incisors and tiny ears and eyes. This species is distinguished from the others by black and white head markings.

They display fossorial or burrowing behaviour, digging extensive underground burrow systems marked on the surface by mounds of sand. They dig using their well developed incisors, then use their feet to shovel loosened earth out of the way. Most digging follows rain. Within burrow systems, there are usually chambers that serve for food storage. Activity patterns do not seem to be tied to day or night but active and resting periods are spread through 24 hours. They are vegetarian, eating mostly roots, bulbs and tubers. They are considered a pest by gardeners, farmers and in urban areas damaging roads, runways and golf courses to mention just a few.

While the majority of Mole-rats live in colonies, the Cape Mole-rats are solitary burrow dwellers, only coming together to mate. They are seasonal breeders, producing 4-10 pups per litter after approximately 55 days of gestation. On average, they live for around three years, during which time they typically grow to a weight of 650-890g but can grow as big as 2kg. The larger the animal and larger its mounds.