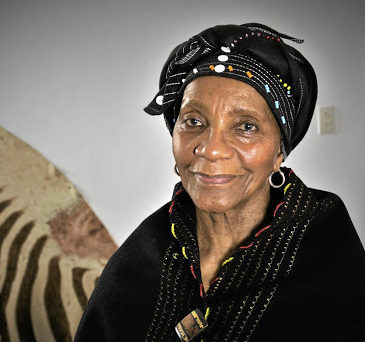 Sindiwe was inspired to write the story after reading a report some years ago in our local
newspaper, The Echo, about a pregnant teenage girl who claimed she had deliberately maimed her unborn child because deformed babies received a higher social grant. “The report concluded by quoting a social worker, who said this behaviour was a growing trend in the townships,” recalls Sindiwe. “My immediate reaction was horror and blame. It took me a long time to see I was part of the problem – for doing nothing. That is why, by the time I embarked on the novel, which is part of my thesis, I could no longer lay my hands on the article that had sorrowed me for years.”

From her sorrow emerged a work that her publisher summarises as ‘a visionary novel about what the loss of identity and dignity do to a people afflicted by decades of brokenness. Told through the lives and spirits of four generations of amaTolo women, including The Old, who speak wisdom with ever-increasing urgency, it moves between the bustling township setting of Kwanele and the different rhythms of rural village life.’

In a revealing and fascinating Q&A on the Pan Macmillan South Africa website, Sindiwe is asked what lessons she hopes her readers will take from the novel. Her response: “That none of us can be a spectator in life; we all have innate abilities which are needed on earth to make life for all, a good life. In each generation, the cohort of parents have a duty to pass on to the succeeding generation what it received from the preceding one. The adults have a collective responsibility for the children of this country… They are ours in community and the distress in which the young wallow should be the business of the entire nation, not just the biological parents or guardians.”

For someone who claims to be a technophobe, Sindiwe’s ability to get her messages online would make her the envy of any 20-something social media fundi. Her personal website, in particular, is a rich source of insights into a remarkable personal journey that has taken her from an impoverished childhood under apartheid to her current position as writer-in-residence at the University of the Western Cape (UWC).

Along the way, Sindiwe passed her matric by correspondence, spent several years as a single parent of three children working as a domestic servant before graduating with a BA degree from the University of South Africa. From there, she left home to further her studies in America, where she eventually ended up spending over 25 years in various roles with the United Nations in New York. She ‘retired’ to Marina da Gama in 2003 and hasn’t stopped working ever since. The next achievement on her list is a PhD in Creative Writing from the UWC at the end of this year.

She already has a packed cabinet of awards and academic honours to her name, including South Africa’s highest presidential award, the Order of iKhamanga, and a publication list now featuring five novels alongside more than 150 other books, over 130 of them written for children.

Her publisher’s synopsis also points out that the novel is also a powerful call to respect the earth that nurtures human life, and to live in self-sufficiency and harmony with the environment and each other. Sindiwe would agree. “Being surrounded by so much peace, quiet and natural beauty makes the Marina a wonderful place to write,’ she says. “It really is Cape Town’s best-kept secret.”

At the same time, South African newspapers remain an endless source of stories very like the one that originally inspired When the Village Sleeps. Sindiwe’s response: “Clearly, the title of the book draws on the African proverb: it takes a village to raise a child. As South Africans, we have become that sleeping village and we must learn to respect ourselves. I sometimes wish we could just get our act together. But I love this country!”

Listen to Sindiwe chatting to Cape Talk’s Pippa Hudson: On the couch with Sindiwe Magona (capetalk.co.za)