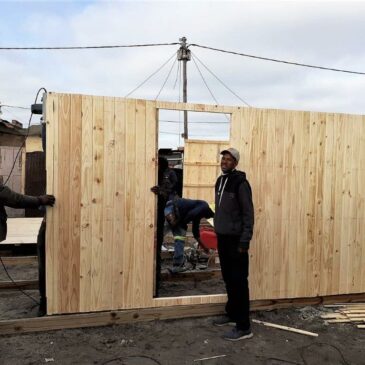 Park Island resident, Beverley Roos-Muller, updates us on how community members helped victims of a devastating fire to turn their lives around.

Photo caption: Paul Kuiler stands at the doorway of his new wooden home, donated by the Weight family from the Marina.

When five Lavender Hill families lost literally everything they owned, after fire destroyed their shacks on the night of 19 May, the prompt compassion and generosity with which Marina residents responded was crucial in helping them restart their lives.

Bags of clothing, household linen and bedding and other much-needed household items have arrived daily. The Weight family generously sponsored a new wooden home for Paul Kuiler and his family. Now constructed on his site, it will radically change their living conditions. Lynne Weight has been on-site every day, in a particularly dangerous section of the shack village. Her energy and constructive contribution have been invaluable, as has that of Lara and (the other) Lynne. Te same applies to all of you who have taken time to think of their plight, and respond so kindly.

Some of the donated goods in Beverley’s house! “There is more,” she says, “including in my garage. Most of this will be moved to the families by the weekend.”

Responders stretched across every divide, including age. Little Lucy of Park Island brought a bright bucket of treats for seven-year-old Danielle Kuiler. Meanwhile Aunt Betty Pretorius of Retreat gave a bag of fine clothing, beautifully packed – she is about to turn 90! And said that, as a former victim of the Group Areas Act, she did so because she knew what it felt like to lose everything.

The fire department must be commended for arriving so promptly, within minutes – helping to limit the spread of fire to only the five affected shacks. City of Cape Town officials have participated; watching site-and-service delivery there, every day, reassuring us that our rates are being put to essential use.

One of the first donations was from little Lucy of Park Island; this lovely bucket of treats for seven-year-old Danielle Kuiler, who was thrilled.

The appeal is now closed except for funding, which has been critical; there were so many unexpected expenses (and still are), from transport to communications, school needs, as well as food.

Thank you on behalf of those whose lives were shattered one fiery night, and who are now beginning to face the future with new hope and dignity.