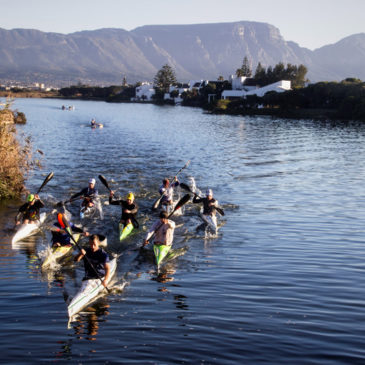 According to Rob MacLean, one of the Marina residents who took part in the event: “Everyone stepped up to the mark. It was a world-class event in which world-class performances were turned in. Take, for example, the Senior Men’s K1 and K2 events, which involved no fewer than five current or former world champions. Or the women’s senior races, which featured an Olympic bronze medallist as well as a former U23 world champion.

“In the Masters’ category, there were multiple former world Masters’ champions. So, even though the baalies might be a bit longer in the tooth, so to speak, the competition among them was also of the highest standard.”

(For background: Masters’ categories are divided into five-year groupings starting at 35-39 years then 40-44 years all the way up to 70 plus years.)

As for latest sewerage spill, Rob says: “Because it occurred downstream from the main vlei and the Serpentine, where the southern-most turning buoys were, it had no impact on the competition nor on the competitors.”

Meanwhile, please join us in congratulating everyone who made this such a memorable sporting event!