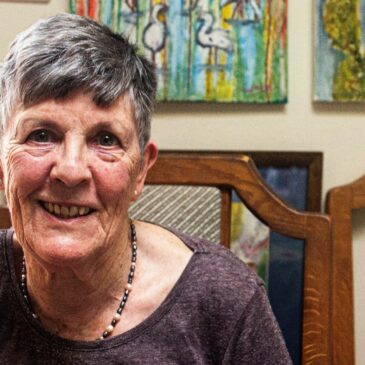 In the second feature in our series on local craftspeople and artists, we introduce Eastlake Island resident, Carol Andrews. Following a long and successful career in the travel industry, she now focuses full-time on creating pewterware, mosaics and other highly original craftworks from her home studio. She is also an accomplished painter.

“I first started studying art through UNISA then at Wits before I was persuaded by a client to run a travel agency he had just set up, initially in Honeydew, Joburg,” recalls Carol. “When I eventually retired from Travelways in Pinelands four or five years ago, one of my clients offered to pay for my pewter work lessons. So, in a sense, my life has come full circle.”

Carol draws rich inspiration from her surroundings in the Marina, where she has lived for the last five years. “The water, the light, the plants, the birds… We are so lucky to live here,” she says. Another source of nearby inspiration is her current teacher, Juli Jana, who also lives and works in the Marina. As her student explains: “Juli is an extremely talented lady who combines art with poetry and holds frequent exhibitions. She uses all the mediums but loves to teach watercolour.”

Carol also pays tribute to a number of other teachers, including Jo Cooke, who always emphasised the importance of drawing as the basis of all good paintings. “Jo has moved to Ireland,” comments Carol, “but she teaches online and we are still in touch.”

Carol’s latest passion is decoupage, the art of decorating objects by gluing colored paper cutouts onto it in combination with special paint effects, gold leaf and other decorative elements. “This is new for me,” she says. “It’s sticky and messy but gives extraordinary results.”

As well as crafting and painting, Carol is also a keen writer and is currently in the process of drafting her autobiography. Given her fascinating background, the final book is bound to be a great read. Born in the UK, Carol later lived in Zimbabwe, where her father, Alex Inglesby, played an influential role in shaping the country’s post-Federation tourist industry as a member of Ian Smith’s government. Anyone who ever enjoyed a Flame Lily break has Mr Inglesby to thank!

Right now, Carol’s book remains a work in progress as she focuses on producing her highly original pieces. To see – and possibly buy – her work for yourself, please join us at Frank’s in Eastlake Shopping Centre from 7.00pm on 5 May for our inaugural First Thursdays event.

“UNISA in Pretoria was where I learned the most. I particularly remember one teacher who said he disliked streams and trees in a chocolate box setting. He liked to see drama in our art. When I accidentally hung one of my pictures upside down, he said that was the one he liked.”