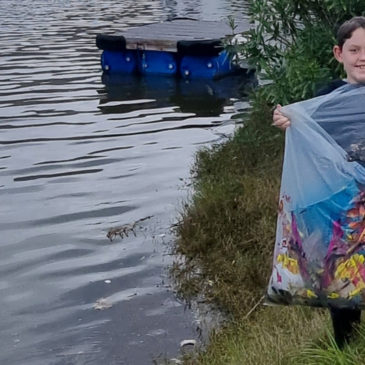 Many thanks to Jill and Andy Rumbelow for introducing us to their community-minded
grandson, Ross De Villiers, who recently set a great example to all residents by launching his own anti-litter campaign.

As Andy explains: “The very heavy rains that fell on 8 July brought masses of litter from the rivers feeding Zandvlei into the Marina’s canals. Ross offered to go on a one-lad clean-up, and set off with a net and two litter bags – and filled both of them.”

Ross, aged seven, is a Grade 1 pupil at Bergvliet Primary School. This isn’t the first time he has made a difference in the Marina through his own litter-busting efforts. “We’re very
proud grandparents,” says Andy.

Good on you, Ross!