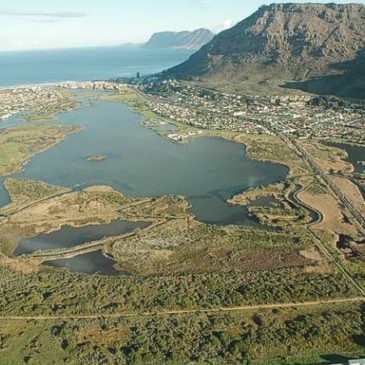 We’re pleased to share the Zandvlei Trust’s latest monthly report, courtesy of Marina resident and committee member, David Bristow. It’s always good to know who is doing what to conserve our precious environment.

This month there is some wicked news to share with you, but first I’ll deal with the admin of our recent monthly committee meeting, as I must.

First thing: we are thrilled to be able to report that we helped Ceini Smith of the Ngcungcu Sunbird Project raise a R100 000 donation from the Rowland and Leta Hill Trust, to extend the sunbird indigenous gardens between Table Mountain and the Boland Mountains.

It was suggested that next year we apply to the Rowland and Leta Hill Trust for funds to support the FynbosLIFE Bossies project, for the planting of indigenous gardens and sidewalks on public land throughout the greater Zandvlei area. (We were not able to do a site visit of the proposed Vrygrond Fynbos Garden, but hope to do so soon.) We’ll also be submitting a funding proposal to the National Lotteries Commission, probably for environmental education.

Our Westlake garden project hit a speed bump a few months back, not least after the City cut off the water supply. But with committee member David Rogers ready to take over the management, we’re hoping for major improvements – not least the water re-connection!

Avid fisher and new father, Nick Bode, was co-opted onto the committee to fill the gap left by outgoing chairperson, David Muller. Nick has agreed to champion the nascent litter campaign and, once he’s mastered the art of feeding and changing, we’ll be meeting with Zandvlei Estuary Nature Reserve manager, Kyran Wright, to work out the fine details.

Planning has begun for the resurrection of our newsletter, with vice-chair Jan-Willem busy working on the content outline. We hope to launch end of May. If you have any material about the vlei you would like to share – anything – please let us know. Jan-Willem is also helping us streamline the Zandvlei Trust website, particularly a ‘hot’ application page.

Plans for a winter school were deemed too ambitious, but we decided we’d rather host one-off talks by interesting people about interesting things on the vlei and related subjects. Watch this space.

And now for the wicked news. Over the past few weeks numerous people in the broader community have been invited to presentations about the future of the City’s waterways. Our new mayor, Geordin Hill-Lewis, has arrived like a flood of fresh water, pledging to put all the council’s resources behind the rehabilitation of our natural waterways. This is something most of us have been willing for most of our lives.

But we have a ‘wicked problem’, he told us [involving] concrete canalization of most of our rivers by the City’s stormwater engineers mid last century; agricultural pollution from as far afield as Malmesbury, but also our local golf courses and wine farms; mass urbanisation and resulting informal settlements that have flooded around green spaces and waterways; an aging sewerage infrastructure, and misuse and damage to the sewerage system, much –  if not most of it – caused by the flushing/dumping of used ‘disposable’ nappies.

This financial year alone, around R5 billion by my reckoning has been budgeted to start the massive project of reclaiming our rivers and wetlands. While most of it is earmarked for upgrading and maintaining the sewerage system, more than R50 million has been allocated to improving the Sand-Langvlei River system.

Phase one will involve a creating wetland ‘sink’ at their confluence, which will help trap and process sewage spills while also containing other pollution by acting as a natural trap and filter. Phase two will look at rehabilitating those rivers back to a semi-natural state – as God and/or Mother Nature intended. It’s not a quick-fix thing, and will take decades to see through. Nevertheless, the process has started and the wheels are already turning.

Within the next few months, we have been told, the process of public participation and consultation will begin, when we’ll have a say about how things could and should be done.

This really is a dream come true. Not so much for ourselves, but for our children and their children, when rich and poor alike will enjoy the wonders of the City’s waterways – playing, swimming, fishing, picnicking, walking, riding. Wicked hey!

Be cool, be green.